Truvox scrubs up at the Trojans Club 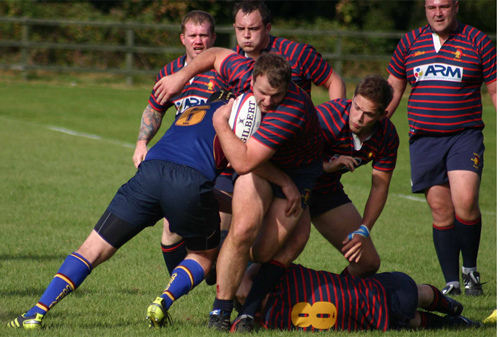 Rugby is a full contact sport – with the players’ kits taking as much punishment from mud and grass as the players themselves through tackles and line-outs. It can be a dirty game – literally – and the same goes for spectators, who huddle on the sidelines to cheer on their teams, and collect their own share of the mud. This means that rugby clubs need to make sure that they have the right cleaning regimes and machines in place to tackle the problem robustly.

The Trojans Club, based in Southampton, was formed back in 1874, initially as a rugby club. Over the years it has grown to encompass three more very active sections – cricket, hockey and squash – so its facilities are well-used and need to be cleaned to a high standard on a regular basis. With a variety of hard floors to clean, and different activities taking place constantly, they needed a cleaning machine that combined manoeuvrability with the best hygiene results – and they found their perfect ‘team mate’ in the Truvox Multiwash.

Wyn Jones, honorary secretary of the Trojans Club, explains: “Initially we purchased a Multiwash 340 machine to clean the function room floor, but we soon realised that its versatility meant that we could clean a variety of other hard floors quickly and easily too, such as those found in the bar area.

“Our function room has a sprung timber floor which gets quite dirty following rugby and hockey matches on Sundays, as parents and children come in to socialise. As the room is used for Pilates lessons in the week, which encompasses a lot of floor work, we have to make sure that it is scrupulously cleaned. We’ve had great results from the Multiwash, which both cleans and scrubs the floor, unlike mopping which just moves the dirt around.

“It has helped to reduce the time it takes to clean the floor, in contrast with previous methods, and in addition it’s more productive as it gives us the flexibility to clean other hard floor areas within the club. We are also able to reduce our maintenance costs, as there is less need for wooden floors to be sanded down thanks to the excellent cleaning standards the Multiwash achieves. Truvox also sponsors Trojans Rugby, and this is a great example of club and partner working together to produce the best results – both on and off the pitch.”

The Truvox Multiwash is designed to be highly effective on ‘difficult’ floors, which can include non-slip safety flooring, low pile carpets, escalators and entrance matting. It optimises cleaning time by being able to wash, mop, scrub and dry on both hard and soft floors in one single pass.

“Initially we purchased a Multiwash 340 machine to clean the function room floor, but we soon realised that its versatility meant that we could clean a variety of other hard floors quickly and easily too, such as those found in the bar area.”